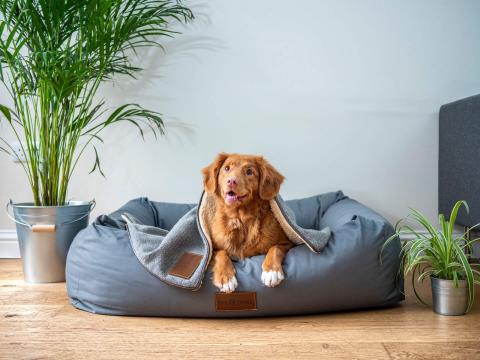 When we've been nibbling away at our favourite vegan cheeses, we've had our little pup looking right into our eyes and soul, praying we'll hand them a morsel of the delicious plant based cheese we are eating.

Not knowing whether we could feed our dog vegan cheese, we thought we'd look more in to it.

When we've been nibbling away at our favourite vegan cheeses, we've had our little pup looking right into our eyes and soul, praying we'll hand them a morsel of the delicious plant based cheese we are eating.

Not knowing whether we could feed our dog vegan cheese, we thought we'd look more in to it.

Before we get deeper in to the answer, we want to make you aware that every single vegan cheese is different, but hopefully we can guide you through this to give you some answers.

What Ingredients Are Used in Vegan Cheese

We can only work out what vegan cheeses dog can eat, if we know what is in them.

We've talked about what is vegan cheese made of in another article in much more depth. We will use this to touch on the main ingredients used to see if that is ok for dogs to eat.

Below are some of the most used ingredients in vegan cheeses from our database.

Coconut oil is one of the most used ingredients in vegan cheeses and these make up most of the supermarket branded vegan cheeses you will see on their shelves.

Salt is used in a lot of vegan cheeses, but not all, so make sure you check whether there is salt in the ingredients for the vegan cheeses you are trying and want to share with your dog.

The other type of vegan cheese that you will find are nut based vegan cheeses, like cashew nut cheese.

Cashew nuts are used in a lot of vegan cheeses and you've probably tried a few yourself.

What Can Dogs Eat

Dogs are obligate omnivores, which means they can survive off of meat and plants and there is a growing movement of vegan dog owners around the world with the oldest dog to ever live having lived on a vegan diet.

We won't get lost in that topic, as there are plenty of websites and resources answering questions about bringing dogs up on a vegan diet.

From above, we can see that coconut oil, salt and cashew nuts are found in most vegan cheeses, below we look in to whether these are safe or not for dogs to eat.

First of, you'll find most dog foods contain some form of oil, this is to help bulk up the calories and because it's cheap to produce, so coconut oil should be ok for your dog, right?

When properly prepared and served in adequate amounts, it’s not only a delicious treat but a nutritional one as well.

From The Dog Bakery

The answer to that first question is YES! The oil isn’t the only part of the coconut that’s beneficial and healthy for our canine friends. And I’ve discovered recently that my dog simply loves the taste of coconut oil, so why not branch out with other treats containing this superfood?

Coconut is non-toxic to dogs, but it does contain medium chain triglycerides, which may cause some gastrointestinal upset and bloating.

That is a resounding yes, dogs can eat coconut oil which is used in many vegan cheeses.

Cashews are one of the most used ingredients in vegan cheese and one of the main nuts to be used as well.

You will find vegan cheeses made of other nut types and soya too, but here we'll look if dogs can eat cashew nuts.

Can my dog eat cashew nuts? Yes, cashews are generally safe for dogs to eat. Unlike macadamia nuts, cashews are not toxic to dogs.

Dogs love peanut butter, but that doesn’t necessarily mean that other nuts are safe or healthy for your pet. Cashews are not toxic for dogs, but it’s possible that your dog could be allergic to them—this is rare, but dangerous. Therefore, when you feed your dog cashews, be sure to look carefully for signs of an allergic reaction.

Just watch out for other nuts and any allergies they may have, macadamia nuts are definitely one nut that dogs can not eat.

Watch Out For Salt in Vegan Cheese

One thing to watch out for in vegan cheese, is salt.

Although it is something they can have, it is only in small amounts, humans sweat out salt, dogs do not and deal with sodium entirely differently to us, so it makes sense to take care with this ingredient.

Can My Dog Eat Vegan Cheese

The answer to that will vary from vegan cheese to vegan cheese, but the simpler the cheeses ingredients, the more chance you'll have of being able to share it with your dog.

The two main ingredients used in vegan cheeses, coconut oil and cashew nuts are both safe for dogs to eat,

If you are going to share your vegan cheese with your dog, check the ingredients first and then make sure to only allow it a small bit at first to make sure it is not allergic to any of the ingredients.

Thinking of going vegan but finding it hard to quit dairy cheese?

Go check it out as we're sure you can find a new favorite or first vegan cheese that you love!

Join our special crew of supporters who are helping us promote the world of vegan cheese, help people find new vegan cheese favourites, and support our annual Vegan Cheese Awards!

What is your favourite vegan cheese type?

Select a type below to find a new favourite!